Isabel Galleymore’s first collection, Significant Other (Carcanet), won the John Pollard Foundation International Poetry Prize in 2020 and was shortlisted for the Forward Best First Collection Prize and Seamus Heaney First Collection Prize. Her pamphlet, Cyanic Pollens (Guillemot Press), is based on her residency in the Peruvian Amazon. She lectures at the University of Birmingham. 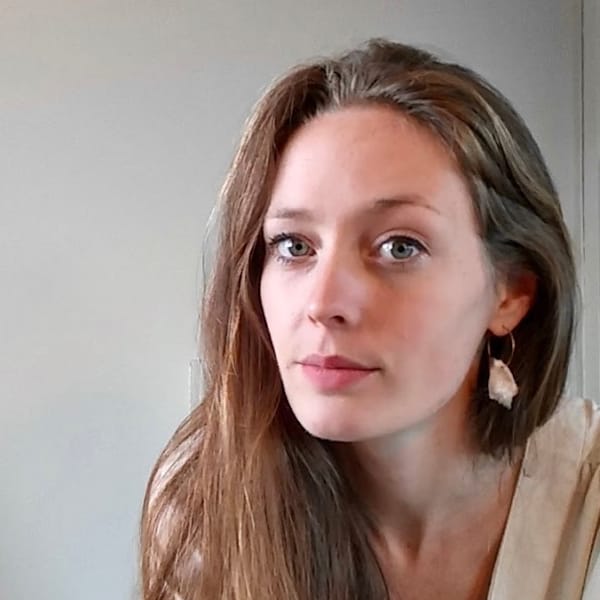 I wander around the toy shop, looking for a gift for a child I used to babysit. There are fire engines stacked upon one another in cardboard boxes. The boxes are deliberately cut away so that hands can press buttons to sample the fire engines’ light and noise. There is a four-foot fluffy unicorn with a rainbow horn. There are small Perspex tanks filled with animal figurines. One is filled with farmyard animals, one with cats and dogs. Another holds a collection of sea creatures. The whale and the seahorse are of equal size.

A friend has sent me a link to a Youtube video in which an elephant paints a self-portrait. The easel wobbles on the uneven ground. The audience can be heard saying wow and unbelievable. When the video ends, another loads and plays. A beagle holds a paintbrush in its mouth and dabs at a small canvas. Another video loads and plays. French jazz music and a cockatoo wielding a loaded brush in its beak.

In The Companion Species Manifesto, Donna Haraway explores the interactions between humans and what she calls ‘companion species’, which range from domestic dogs and cats to ‘rice, bees, tulips, and intestinal flora’. Intimacy and strangeness coexist, which leads her to think of animals as presenting ‘significant otherness’. What interests Haraway is the way in which these species co-shape one another. She focuses on her dog, Ms Cayenne Pepper to discuss physical co-shaping – the microbiome of a pet and of its owner are understandably changed by one another – but also about other forms of co-shaping.

When I read Haraway, I reflect on all the times I’ve paused on the street to lure a cat closer by making strange squeaks and clicks with my mouth. It can’t be said to be a human language exactly. But then it isn’t a cat language either.

In the Perspex tank, the chicken stands on a little circle of green. The cow’s udder is like a row of pink sugar mice. What does it mean to domesticate animals? How can we tell what’s ‘natural’ and what’s ‘human-made’?

Animals are consumed in other ways too. It’s recently been reported that watching cute cat videos online can boost energy and positive emotions in viewers. In Alex MacDonald’s sequence ‘Internet Cats’, the poems are titled after different Japanese Instagram cat profiles and the poems themselves are collages of the translated captions which accompany the profiles. ‘Good night, I am the youngest of this house /and I am drying my sister, taking pictures / with that funny look’ begins ‘Dooboo Cat’. The out-of-context translations, which are themselves mis- or bad- translations, make it difficult, if not impossible, to pin-point whether the subject is animal or human. It makes sense that our absurd relationships with animals – and the word ‘relationship’ here feels strained – are articulated through absurdist poetics.

‘When the seabed in ‘Deep Water Trawling’ first “spoke” I almost dropped my pen’, explains Jorie Graham in an interview with Sarah Howe. ‘Honestly, I was scared because I didn’t know what to “say”, what there was to be “said”. So I kind of listened, maybe one could say I channelled—that would be apt.’ Depicting the damage inflicted by fishing trawls on species and habitats, Graham gradually introduces dialogue: ‘nets abandoned in the / sea they continue through the centuries to catch – mammals fish shellfish – we die / of exhaustion or suffocation – the synthetic materials last forever’.

When I imagine the little whale washed up on a shoreline centuries from now, I imagine whoever finds it, knowing what it is, slips it into their pocket. In a gloomier frame of mind, I imagine that they don’t know what it is at all.

It is not just charismatic megafauna that are under threat. Recent discussions have focused on dwindling insect populations. Literary scholar Michael Malay describes how difficult it can be to conceive of insect extinction when we may not be familiar with the species involved, or when their physical bodies are simply too small to see. In a scrapbook, Malay collects well-known insect poems from the twentieth century. He erases the text that features insects in order to visualize their loss. In Malay’s editing of Yeats’ poem, ‘the bee-loud glade’ is silenced.

Animals materialise in poems. They arrive in subject, metaphor, alliteration, form. Think of e.e. cummings’ grasshopper poem, ‘r-p-o-p-h-e-s-s-a-g-r’, Major Jackson’s ‘Pest’, or Marianne Moore’s ‘The Paper Nautilus’. Writing about animals is nothing new, but the fraught ecological age that affects our current relationships with animals is. Our representations of other species can document our changing attitudes to them – whether that concerns our kitsch, childish pleasures, or our existential and ethical questions. Is it possible that there might be some crossover?

It’s a warm afternoon on the street. A tail flicks in the shade of a parked car. I’m walking to an appointment and I’m a little late, but I stop. Perhaps poetry can, like the mouth, try on new shapes and sounds in order to bring about an encounter. Look how she rolls in the dirt and purrs.

Image Credit: ‘Whale‘ by Paul K. A filter has been applied. Licence.