‘The View from Fife: The Wild Life of Scots’

Kathleen Jamie is a poet and essayist. Raised near Edinburgh, she studied philosophy at Edinburgh University, publishing her first poems as an undergraduate. Her 1995 collection The Queen of Sheba won the Somerset Maugham Award and the Geoffrey Faber Memorial Prize and was shortlisted for the T S Eliot Prize and the Mail on Sunday/John Llewellyn Rhys Prize; The Tree House (2002) also won the Forward Poetry Prize and the Scottish Book of the Year Award; The Overhaul, brought out in 2012, won the Costa Poetry Award. In 2016 Kathleen won both the Saltire Poetry Book of the Year and the overall Saltire Book of the Year for her collection The Bonniest Companie.
In recent years she has turned her pen to essays to much acclaim, with her collection Sightlines winning the John Burroughs Medal and the Orion Book Award in the USA. Her most recent collection of essays, Surfacing, was published in 2019.

Kathleen is currently Professor of Poetry at Stirling University. One of her poems is inscribed in on the national monument at Bannockburn. 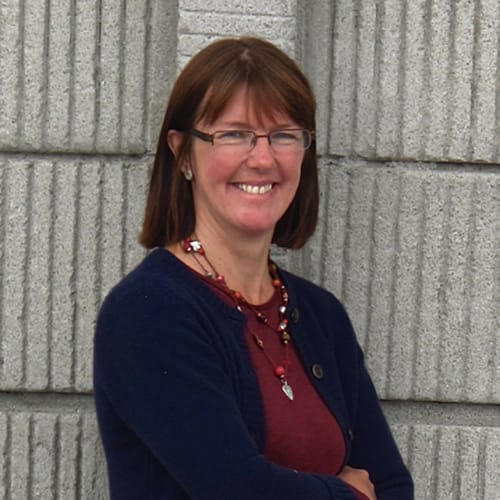 This afternoon I took the dog and went down Gardens Road to the waterside, to enjoy the view northward over the Firth of Tay to the fruit-fields and hills of the Carse of Gowrie.  From the river you can see westward up the strath to higher hills: Ben Vorlich, Stuc a Croin. There you are, three languages all swirling together. Gardens, firth, carse, beinn, strath.

I’d brought my binoculars. This time of year the geese are arriving, fieldfares and starlings too.

I’d been thinking about the Scots language, and feeling despondent about the state of the world, its diminishing wildlife and shrinking habitats, its vanishing multi-variousness and nuance. The two meld together in my mind: the wildlife I love and the Scots language. Both seem fugitive and assailed.  If I hear one of the townsfolk here speak a long spiel in Scots, I feel the same pleasure as if I saw a flock of peewits. And if I hear a rarity, it’s a special tick. For example, I’ve only ever once heard someone, an old lady, say she was “forfochelt.”

You do hear a lot of Scots hereabouts, and not only from the old folk. Recently I nipped into the garage to mention a problem with the car, and the obliging young mechanic replied, “nae bother, bring it in the morn an I’ll gie it a dicht.”

Double tick!  “Dicht” is a word I’ve always known, it means a quick wipe. Gie yer face a dicht. But “dicht” as “give it a once-over” – that was new.

We walked along the river, the dog and me, and I spoke to a woman I know to see. She told me she’s seen a sea-eagle here last week, over the river island. I noticed that, though she had a local accent, she spoke no Scots words. But she works at the school. Perhaps these two facts are related.

The next man I spoke to was at his door of his house, a water-side bungalow protected by a low wall. We spoke about the floods that occur rarely here. Did the water threaten his bungalow?

We walked back through the streets of the council scheme. A sparrowhawk went tilting over the rooftops. A dozen starlings were splashing in a puddle, scattering bright drops. A wee girl ran up to us. “Can I clap the dog?” she said. “Clap” as in “stroke an animal,” not as in “applaud.”  Tick. The girl was three, so she told me. I note she said “dog” not “dug.”  Further on, I stopped at the Co-op for milk. There was a long queue at the checkout. Two male servers were doing their best but “they laddies’re ower slaw, it’s the lasses we’re needin,” joked the man behind.

We went home, the dog and me. It’s not so bad. I’d seen plenty birds and heard plenty Scots. As ever. It’s just a matter of getting your coat on and out there.

No one denies there is Scots speech. The politically motivated ding-dong about whether it’s a language or a dialect or “just slang” is very wearisome. If it walks like a duck and quacks like a duck it’s a duck. At the moment Scots is enjoying wary governmental support, which might just be the quack of death. There’s also a lot of tea-towel and mug-making going on. I mean, you can buy tea-towels and mugs and tee-shirts printed with braw Scots wurdies snipped out of out of their syntax, flushed out of their shrinking habitat and “celebrated.” You can dicht your dishes with words like “braw” and “crabbit.” Better that then being punished at school for speaking them. I suppose.

I once taught a student who had a Scots word tattooed on her wrist, I caught sight of it one day when she reached for a book. Why have you got “dwam” tattooed on your wrist? I asked. “It’s my favourite word,” she said.

“Dwam” – a waking dream, a trance. The kind of thing that got you into trouble with your teacher.

Forfochelt, dwam, crabbit – you might say they are the charismatic megafauna of the language. But they need a whole functioning lowly eco-system to thrive.

How do you spell ”buhlt?”  If we write just what we hear, it’s a mish-mash. English with Scots vowels, Scots words with English syntax, cadences that vary coast to coast and island to lowland. If you write “buhlt” the cry goes up – that’s just English with a Scottish accent – how can you pretend it’s a different language? (Language purists of the other sort would also complain, saying that the “real” Scots word would be “biggit.”)

Personally, I’ve given up even trying to write in Scots. But I want to. I long to. It’s the most intimate, heart-felt speech I have. It’s also wild and diverse and scunneratious and un-establishment. Some folk want to keep it that way, and not have it become established and government-sanctioned and spelled correctly. Some folk prefer it unfixed, unteachable, like a sparrowhawk, or a bunch of splashing starlings. But the problems defeat me. I mean the problems of legitimacy, as much as readability. Can you use words snipped out of the dictionary, or do you have to hear them alive and in flight before you can bring them into a poem? If your Scots is pulled together from hither and yon, from the living and the dead, from books and dictionaries, then it’s “synthetic,” which is wrong, apparently. (Remind me why again? Oh aye – because no one ever spoke like that. But no one ever spoke like King Lear.)  If “synthetic” is illegitimate we’re all reduced to the language we half-learned as a wean/bairn/child. (But at what age did I learn the word “nuance?”)

And a Scots which is just orthodox English with a few braw words displayed, as on a tee-shirt, that’s just signalling. Isn’t it?

One day I was talking to our street-sweeper. A “scaffy” is a street-sweeper, but I’d never call him that, it’s far too derogatory. He described our mild Autumn days as “maumie” – a new word to me. Can I store that word away and bring it forth one day, in a poem, in a piece of prose? How do you spell it anyway? (Checking the Scottish National Dictionary, I find it’s there right enough: ripe, mellow, mature.)

And what if you crave clarity, as a writer? If you wish to be as Orwell’s pane of glass, which is visual as much as anything else, you can’t be true to your ear, you can’t write buhlt. What do we do with that?

And we haven’t even begun to talk about the independence referendum. Awful, if Scots is to be the mascot of one side only – guess which. I’m truly glad that I can’t make political assumptions about my neighbours based on their use of Scots. Thankfully, in Scotland, Scots is not the marker of any religious affiliation.

Don’t give up, I plead with myself. Don’t capitulate. You can do both! Master English and Scots! Aye, but which kind of Scots? From where?

Because it’s such a bourach, it’s hard to find poets writing real poems in good, fulsome Scots. There’s plenty wurd-sprinkers and signallers, there’s plenty doggerel-mongers, and the only newspaper to have a column in Scots is the new one, The National, “The a paper that supports Scottish independence.”

But the three poets here seem to be negotiating successfully, making actual poetry. They’re acutely interested in language, in syntax rather than messaging.  They’re listening hard and gently, and are all fortunate enough to have been raised in defined Scots speaking places to which they can return to replenish themselves. But we can’t even say that with confidence – Shetlanders and Orcadians might object to having their speech labelled “Scots,” though Lowlanders like myself recognise much of their diction and grammar.

Also, I suspect that at the heart of their work is not government-sponsored “celebration,” or conservation agendas, not the politics of identity or class, but –  dare we say it – love.

But what is love? MacDairmid is often mentioned in these over-thought debates. (They are over-thought, we should just dive in and do our heart-felt best and worry about the spelling later.) MacDairmid, but for some reason not his contemporary W L Lorimer. The latter is the translator of the New Testament into Scots, a virtuoso work with different kinds of Scots for each Gospel. Lorimer was a superb linguist who could work direct from Greek into a Scots by turns intimate, vivid and magisterial, and gleaned from all over. This masterpiece was only published in 1983.  Had we had it 300 years before, we might not be so fashed. We might be fully bilingual, like most Europeans, with an appropriate hike in our self-esteem and health because no one could sneer at our “slang” or turn it into dish-cloots.  Here is 1 Corinthians 13 4-8:

This article first appeared in Irish Pages / Duillí Éireann. Irish Pages is a biannual journal, edited in Belfast and publishing, in equal measure, writing from Ireland and overseas. Its policy is to publish poetry, short fiction, essays, creative non-fiction, memoir, essay reviews, nature-writing, translated work, literary journalism, and other autobiographical, historical, religious and scientific writing of literary distinction. There are no standard reviews or narrowly academic articles. Irish Language and Ulster Scots writing are published in the original, with English translations or glosses.