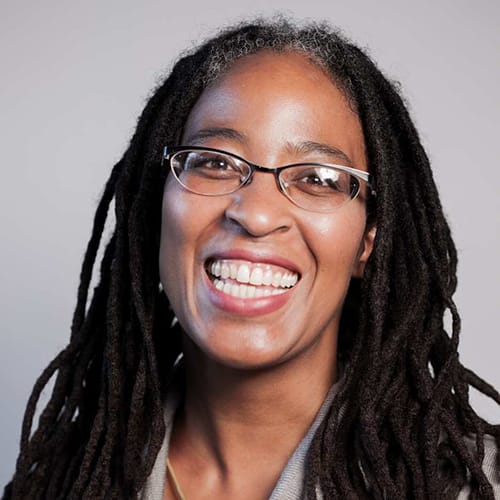 As I write this, snow is falling heavily outside. Mother’s Day was four days ago. I spent that afternoon at the municipal garden’s annual plant sale buying blooming starts that my daughter and I proceeded to place all over what was, until this morning, a bright spring garden. My daughter finishes her school year next week. This weekend we’d planned to host a party on the patio and let the kids have a water balloon fight, but today it has already snowed five inches and reports now say this will continue through at least the end of tomorrow. Based on the weather app I check constantly, the meteorologists didn’t see this coming. Our garden is demolished. So are my spirits.

There must be a reason for these late season sunflower-sprout-killing snows. I’ve loved reclaiming the rock beds with which our house’s previous owners hardscaped the yard. A neighbor stopped on Tuesday evening while I was pulling plastic “landscaping fabric,” laying down fresh topsoil, and planting milkweed and rudbeckia starts. She told me she enjoyed the garden, which I have arranged for human pleasure as well as for the sustenance of pollinators and birds. I’m proud to tend a slightly wild landscape that so many living beings can love. But this late season storm may have ruined it all.

I’ve had a few lines of a poem by Countee Cullen running through my head all day: “I doubt not God is good, well-meaning, kind…” Cullen questions a God whose ways are “inscrutable.” His poem isn’t about late spring storms or decimated wildflower gardens. I have to be careful not to reduce the gravity of Cullen’s concerns. His poem is about the soul crushing agony of being born with the mind of a poet in a white world that won’t recognize that a black body can produce poetry—anything—of merit.

I wanted to propagate beauty. This snowstorm is destroying my hope.

I was asked this week how I see the intersection of spirituality and social justice. I was asked what those terms mean to me. Where I see them overlap.

The answer, for me, is everywhere.

When I think about these questions, I think about this garden I am trying to foster. Where there were rocks and a lawn—what Michael Pollan calls “nature under totalitarian rule”—I am sowing native wildflowers. Where there were water-hungry shrubs, I have tried to install drought-tolerant plants. Thinking about my role in encouraging a sustainable local ecology is not, to me, separate from thinking about social justice. A water shortage anywhere nearly always means, first, a water shortage for people of color, children, women, people of fewer economic means. If I think about replacing my lawn and my water-guzzling plants with drought-tolerant landscaping that throws off less heat than the hardscape the previous owners installed for their own convenience, I am thinking about taking care of this planet and the vulnerable life forms (people included) who live here. If I am thinking about tending The Creation with conscious attention to balance, I am thinking about social justice as much as I am thinking about the ways flowers help keep me spiritually vibrant.
I was asked this week about how the ways other people view me shape the ways I see the world. I am about to publish a collection of personal essays about race, motherhood, and history, and so people are asking me questions such as these. That I thought about Countee Cullen as I protested this snowstorm’s demolition of my garden, and also that I thought of Phillis Wheatley and the line from “On Imagination” where she asserts that, “Winter austere forbids me to aspire,/And northern tempests damp the rising fire” has something to do with what I think about how the way other people view me shapes the way I see the world.

It is not irrelevant to mention that I am a black woman. Some large part of how I am able to move through this world is bounded by this fact. Wheatley was writing about the weather in New England when she penned those lines, but, of course, she was also writing about the fact that she was an enslaved black woman whose entire present and future was defined by the fact that as a child she was kidnapped from the West Coast of Africa and sold into slavery in the American colonies. The “northern tempests” indeed. With such a history in mind, it is impossible for me to separate questions of environmental awareness from questions of social justice. I am always aware of who I am and how I got here, and I pay attention to how here might be differentiated from some other place. I know that when we talk you are either consciously aware of the fact of my skin and its historical significance in this landscape or you are consciously—or perhaps unconsciously—working on not making my skin and its history an issue of note. I was, for instance, pleased to know the neighbor appreciated the care I took with my yard. It is nice to be complimented when I put energy into a place I love. Also, and importantly, it is nice that she took the time to make it known that she felt positively about the changes I was bringing to the block. Do the ways other people view me shape the ways I see the world? Yes. The presence, and equally the absence, of particular modes of perception will always and forever shape my world.

I was asked if I could talk a bit about how these perceptions themselves are at the intersection of spirituality and social justice—whatever those terms mean for me—and I think that maybe there is something important to say here about faith. What is it they say about faith? I’m loosely quoting Hebrews here. Faith is the evidence of things not seen. Or it is the belief in things not seen. Or it is the hope that that which has not yet materialized might become, some day, manifest. In this passage of Hebrews, there is mention of a lot of people who hoped for some future when/where a promise might somehow be fulfilled. And in this same passage of Hebrews, it is explained that one of the hallmarks of faith is to be able to hold such a belief—to live with a promise in which you fervently believe—and, though what has been promised has yet to be fulfilled, and may never in your lifetime be fulfilled, to find a way to carry on.

Someone asked me how reading and re-reading history helps me understand the present moment, and how my reading of history—itself an act of perception—is a spiritual act and also an act of social justice. I say: Phillis Wheatley was an enslaved woman who nevertheless, somehow, in the 1770s, found a way to write poetry that I continue to gain strength from today. I say: Countee Cullen was a black man who, at the violently segregated turn of the 20th century, found a way to write, in careful and moving verse, some of the most profound social commentaries I ever have and perhaps ever will encounter. I say: these people had faith that somehow the words they wrote might move out of their heads and onto the page and that these words might continue to resonate and make some sort of impact on the world. I say: I have been telling myself all day that I planted countless seeds in my garden and that some of these have not yet sprouted but that they may, after this blizzard passes, soak in the slowly released hydration delivered by the snow. I say: these seeds will, soon—but perhaps not too soon—explode into phenomenal blossom. §