David Baker is author of twelve books of poems, including Swift: New and Selected Poems (W. W. Norton, 2019) and Never-Ending Birds (Norton), awarded the Theodore Roethke Memorial Poetry Prize in 2011. His six prose works include Show Me Your Environment: Essays on Poets, Poems, and Poetry (University of Michigan, 2014). He has won prizes and fellowship from the John Simon Guggenheim Foundation, National Endowment for the Arts, Mellon Foundation, and Poetry Society of America. Baker holds the Thomas B. Fordham Chair of Creative Writing at Denison University and for many years has served as Poetry Editor of The Kenyon Review. For the past seven years he has curated an annual eco-poetry feature, “Nature’s Nature,” for The Kenyon Review. 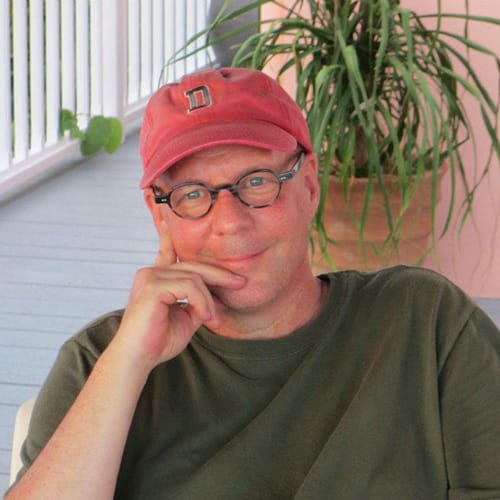 Here she comes with her face to be kissed. Here she comes
lugging two plastic sacks looped over her arms and stuffed

with fresh shoots. It’s barely dawn. She’s been out
for an hour already, digging up what she can save

before developers raze the day’s lot sites and set woodpiles
ablaze. That’s their plan for the ninety-plus acres.

She squats in the sun to show me wild phlox
in pink-running-to-blue, rue anemone, masses

of colt’s foot, wild ginger, blood root and may-
apples, bracken and fiddlehead fern—ferns being not

spring ephemerals per se, but imperiled by road graders
come to shave the shaded slopes where they grow.

Once I held her in a snow cover of sheets. Wind beat
the world while we listened. Her back was a sail,

unfurling. She wanted me to touch stitches there,
little scabs, where doctors had sliced the sick cells

and cauterized her skin for safety’s sake.
Now her hands are spotted by briars, bubbles of blood

daubed in brown. She’s got burrs in her red hair.
Both sleeves are torn. She kneels as the sunlight

cuts through pine needles above us, casting a grid
like the plats the surveyors use. It’s the irony

of every cell: that it divides to multiply.
This way the greedy have bought up the land

behind ours to parcel for resale at twenty-
fold what they paid weeks ago.

It’s a race to outrun their gas cans and matches,
to line the path to our creek with transplants

of spice bush, yellow fawn lily, to set aside space
in the garden for the frail. She adjusts the map

she’s drawn of the tumbling woods—where each
flower and fern come from, under what tree, beside

which ridge. Dysfunctional junctional nevus:
a name like a bad joke for the growth on her skin,

pigment too pale for much sunlight. Drooping trillium,
she says, handing me a cluster of roots, unfolding leaves—

rare around here. How delicate, a trillium,
whose oils are food for ants, whose sessile leaves are

palm-sized, tripartite. They spread a shadow over
each stem’s fragile one bloom, white in most cases,

though this one’s maroon. This makes it rarer.
It hangs like a red bell safe from the sun. It bends

like our necks bend, not in grief, not prayer,
as we work with our backs to the trees, as they burn.

Flash forward. For six years I have lived in the village center of Granville, Ohio, population 3,200 in four square miles. As I live here longer, and become a neighbor and citizen and one of the village people, I write about this environment as I learn its particularities. And yes, we never quite fit. Things spill and overpower us. We feel the pressure of what we can never control. Here is “Hungry”:

This time the jay, fat as a boot, bluer
than sky gone blue now that the rain has
finished with us for a while, this loud jay
at the neck of the black walnut keeps cawing
I want, I want—but can’t finish his clause.
Hard runoff has spread the driveway with seeds,
green talcum, the sex of things, packed
like plaster against shutters and tool boxes,
sides of the barn, while the force of water
pouring down from the stopped-up gullet
of gutter has drilled holes deep in the mud.
Yet the world of the neighborhood is still just
the world. So much, so much. Like the bulldog
next door, choking itself on a chain
to guard the yard of the one who starves it.

Something of a similar motivation underlies “Too Many,” a more recent poem. I hope even the lines of this poem bear some of the weight from the work of accommodation, of making things fit or find room. Things are too crowded, aren’t they? Everywhere this crowding spills over. I hope the formal characteristics show this pressure—things broken, bitten off, or overfull, unbalanced—even as I try also to make something shapely and pattern-holding. Pattern out of apparent chaos: fractal as poetic form.
Finally I hope the voice of the poem finds its own way to shift and reconstitute. It sounds to me pretty separate at first—the knowing self amid those amusing neighbors—and quick to judge. I hope it sees itself thus, too, and reorients itself. For all the blurred and plural shapes, the over-plenty of deer and development, the over-plenty of menace and money and leisure, there is one small figure of the fawn. What to do in this case, but stop? That’s the purpose behind the shift in point of view at the poem’s end. The “they” becomes the “we” . . . even as the final line pills over, too long for the page, too long for the form, too long for its own good. Oops. This is “Too Many”: Too many

my neighbors
say, when what they mean
are deer—the foragers, the few at a time, fair

if little more
than rats, according to
a farmer friend nearby, whose corn means plenty.

They nip the peaches,
and one bite ruins;
hazard every road with their running-

Or here in town,
where I’ve
found a kind of afterlife—the townies hate

the damage to their varie-
gated hostas,
shadeside ferns—what they do inside white bunkers of

the county’s one good
course is “criminal,”
deep scuffs through the sand—that’s one thing—but

lush piles of polished-
olive-droppings, hoof-
ruts in the chemically- and color-enriched greens . . .

Yet here’s
one more, curled
like a tan seashell not a foot from my blade, just-

come-to-the-
world fawn, speckled,
wet as a trout, which I didn’t see, hacking back

brush beneath my tulip
poplar—it’s not afraid,
mews like a kitten, can’t walk: there are so many, too

The wild woods are going away, and decorative, engineered trees teeter among our houses and skyscrapers. The hills are smoothed off, and the creeks retrenched, and the drainage managed, the birds fewer, the animals fleeing farther back into the woods and shadows and deeper waters, while a few turn tame from our hothouse hostas and garbage dumps.
The marriage is over. The oil flows. The old fires burn belowground, but the heart grows a new vein. The world keeps making more. What can we do?
Ebb and flow. Spill and capture. Listen and sing.